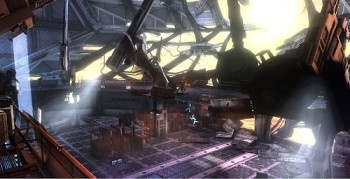 Sony has announced the upcoming release of Steel and Titanium, the first official downloadable content pack for the hit shooter Killzone 2.

The Steel and Titanium pack will include two new multiplayer maps for Killzone 2, each featuring "new gameplay elements and strategic twists." The first, Wasteland Bullet, is inspired by the Tharsis Refinery level in the original game, putting players on top of two bullet trains moving between Pyrrhus and the Wasteland, where they must move along a tight path, dodging obstacles and enemy bullets. Players can jump back and forth between the trains as they progress through the level but must stay constantly aware of the concrete pillars and other objects that can instantly turn them into a high-speed smear.

Vekta Cruiser, the second map, is based on the Cruiser level from Killzone 2 and has players boarding a massive ship, fighting off Helghast forces while protecting the ship from enemy fire. Close-quarters action is the name of the game in this "frantic and claustrophobic" indoors environment, where every new corner could bring instant death.

The Steel and Titanium pack for Killzone 2 will be available on the PlayStation Network on April 30. Pricing has not yet been announced.