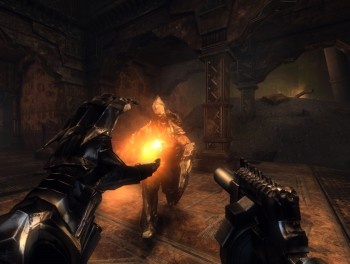 Necrovision, the new supernatural FPS that tries so hard (and fails so badly) to be a new Painkiller, has been refused classification in Australia, the latest in a growing list of games that are effectively banned for sale in the country.

Necrovision is a supernatural shooter set in the First World War, in which players struggling through the slog of trench warfare in 1916 must contend not only with the Kaiser's armies but also the forces of vampires, demons and other creatures from beyond the veil. Based on the demo, at least, it sounds better than it actually is but that's something that gamers in Australia are going to have a hard time deciding for themselves.

The country's Classification Board has determined that the game's violence is too much for the MA15+ rating, the highest available to videogames in Australia, and has thus made it the first game of 2009 to be banned Down Under. The problem, according to GameSpot AU, lies with both the excessive and detailed damage that can be inflicted upon enemies as well as the fact that players can continue to hammer on them after they're dead.

"When the player shoots an enemy combatant, a large volume of blood spray results and the enemy may be dismembered or decapitated," the Classification Board said in a statement. "Injury detail is high with pieces of flesh seen flying from bodies when shot or a high level of wound detail visible on bodies. Post-mortem damage occurs when bodies are shot resulting in blood spray, dismemberment and decapitation."

Necrovision may not be a very good game but I'm not sure what it's done to attract the wrath of Australia's Classification Board. The Farm 51, the studio behind the game, had a hand in creating levels and textures for Painkiller and I don't recall it being any less ridiculously blood-gouting than Necrovision, yet it apparently passed the classification process without a hitch. Australia's Classification Board is notoriously erratic and this appears to be just another example of that inconsistency in action.