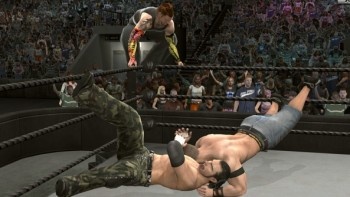 A nine-year-old boy who died after jumping off the roof of his Brooklyn apartment building was apparently imitating moves he saw in the PlayStation 2 game WWE Smackdown vs. Raw.

Damori Miles died after jumping from the roof of his 13-story apartment building with a parachute he'd fashioned from string and a plastic bag. The boy had been left in the care of an older sister while his mother went to the store and neighbors said the alarm on the roof access door, which is supposed to sound when the door is opened, was broken. He was discovered early Tuesday evening and transported to hospital, where he died an hour later.

According to his best friend Shakar Murrel, Miles was attempting to imitate moves he'd seen in his favorite PlayStation 2 game WWE Smackdown vs. Raw. "He tried to do a swan dive like Jeff Harding (sic) does in SmackDown. That was his favorite game. He played it all the time," Murrel said. "That was what he was trying to do. If I would have seen him up there, I would have told him not to do it."

"It's terrible," added Shakar's mother Sumore. "The kids try to imitate what they see and they think they can fly."

It's difficult to fathom the motivations of a nine-year-old child but pointing the finger at WWE Smackdown vs. Raw seems like a dubious proposition at best. Even if we grant that kids that age may have trouble differentiating between 13 feet and 13 stories, why is the Smackdown vs. Raw videogame the focal point here and not the far more pervasive "real" WWE professional wrestling? WWE representative Robert Zimmerman called for a full investigation, pointing out that the game is intended for teenagers 13 and up and that nobody in the game uses parachutes or jumps off buildings.

"The death of Damori Miles is a tragedy and our condolences go out to his family," he said. "We should allow the authorities to conduct a full investigation... including insecure roof access, before conclusions are made about this unfortunate incident."