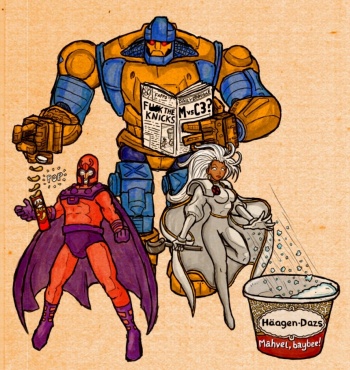 It looks like more and more of a sure thing that hyperactive combo addicts will be shouting "it's Mahvel baybee!" over Xbox Live and PlayStation Network soon enough, as new evidence of the long-suspected re-release has surfaced.

Either Marvel vs. Capcom 2 for Xbox Live and PlayStation Network exists, or there are some cruel, cruel people out there. I mean, the game's been rated by the ESRB for the 360 and PS3 and Capcom has said they're not done with "HD remixes" and that they're well aware of the demand for MvC2.

Now we have two more pieces of evidence: a retailer listing for a MvC2 arcade stick and a list of Achievements for the game.

The arcade stick listing, over at somewhat dubious retailer ShopTo is for a PlayStation 3 and Xbox 360 "Marvel vs. Capcom Tournament Edition Arcade Stick." The listing seems to have been taken down since it appeared yesterday, which means that it's either fake or Capcom had it removed. My money is on the former - MvC2's a much loved fighting game, but I don't know if a downloadable rerelease would warrant producing peripherals. Either way, the ShopTo listing had a July 10 release date, so take that as you will.

The Achievement listing, over at Achievement database Xbox360Achievements.org, lists 12 Achievements for 200 Gamerscore points. There are Achievements for things like winning 50 matches, doing 100 or 200 hit combos, using specific teams, and more. Seems fairly legitimate, and based on my own personal experience, the site is pretty much reliable. I'm not seeing a "Mango Sentinel" Achievement though, so maybe it's fake.

So who knows, really? I'd say the evidence is piled so damn high that at this point it would just be mean of Capcom to not release this, regardless of whether they're already planning to or not. Then again, those guys are a whole bunch of curleh mustached jerks, so I wouldn't put it past them.