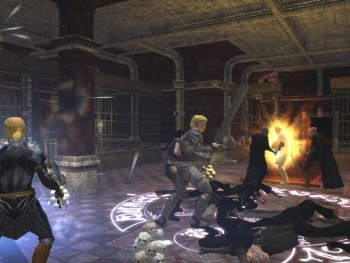 Mysteries of Westgate, the long-awaited "adventure pack" for Neverwinter Nights 2, will finally see the light of day next week.

Mysteries of Westgate will add roughly 15 hours of new adventures in the Forgotten Realms city of Westgate. A powerful but cursed treasure will draw players into a war between the city's factions, including the infamous Night Masks, leading to the discovery of a dark plot that threatens the whole of Westgate itself. Developed by Ossian (not Obsidian) Studios, the expansion will feature new content including "professionally voice characters" and a brand new score.

The expansion has a bit of a controversial history. It was originally slated for release in fall 2007 and was completed on schedule, but Atari delayed its launch due to problems with copy protection. "We realized that the traditional protection of the .EXE file would not work with it so we scrambled to find a reliable commercial method that would do the job," Atari Producer Keehwan Her wrote in a March 2008 post on BioWare's Neverwinter Nights 2 forum. "Unfortunately, developing this system has taken longer than we anticipated and MoW's release has suffered as a result, because it is the first product that will use this new system."

A year and a half later, "longer than we anticipated" is looking like a bit of an understatement. But Atari says the wait is now over, and no kidding this time: Neverwinter Nights 2: Mysteries of Westgate will be available via the Atari Store on April 29 for $9.99.