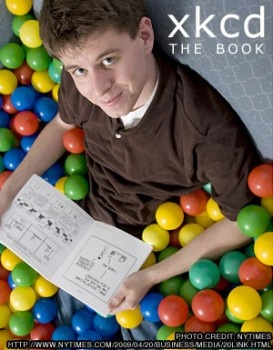 xkcd, the popular webcomic of "romance, sarcasm, math and language" will be making its first leap to the printed page in a book scheduled to come out in June.

The book is being published by breadpig, a company launched by reddit co-founder Alexis Ohanian. Ohanian said the working title is simply xkcd, although a subtitle like "a book of romance, sarcasm, math and language" may be added. The book will be sold exclusively through the xkcd website.

"It doesn't need to be in bookstores. I don't have hard numbers about this, but the impression I get is that the amount of eyeballs you get from being on the humor shelf at Barnes & Noble - it is almost insignificant," said xkcd creator Randall Munroe, explaining that he'd been contacted by conventional publishers about his webcomic. "The traditional model is they send us a royalty, and they handle getting it sold. We figure that most of our audience is people who know us from the internet - normal publishers weren't as interested."

The book will get an initial print run of 10,000 copies and is expected to sell for $19. "We never made any projection - 10,000 seems like a good run," Ohanian said, adding that this lack of research "is laughable from the perspective of anyone who knows the book industry. It's what makes sense." The book will include 150-200 comics as well as a forward and "red-ink commentary" on some of the strips by the author.

Munroe also suggested that copyright on the book would take its cue from the webcomic, which is licensed under Creative Commons, allowing users to copy and share the comics for non-commercial purposes. "To anyone who wants to photocopy, bind, and give a copy of the book to their loved one - more power to them," he said. "He/She will likely be disappointed that you're so cheap, though."

Our Turn to Decide Brendan Main 35 Comments
Comments on