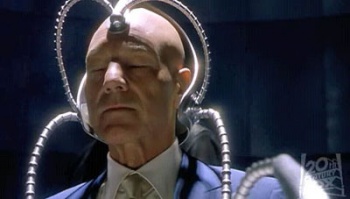 With Twitter rapidly becoming the medium of communication for the stars, one man has managed to send a Tweet using only the power of his mind.

Working at the University of Wisconsin-Madison biomedical engineering departement, Adam Wilson managed to update his own social networking page using an Electroencephalograph (EEG). The EEG is basically a skullcap that detects electrical activity in the brain, and by combining it with a simple communication interface, the message "using EEG to send tweet," was uploaded.

The system was built by Wilson, his adviser Justin Williams, research scientist Gerwin Schalk and a number of his colleagues at the Wadsworth Center in Albany, New York.

It works by placing the entire alphabet on screen while you think about the letter you want to "type", for example the letter R. As each of the letters blink, your mind concentrates on the R and ignores the rest of the characters. When the R blinks, your brain registers that something has changed and the EEG picks up on that and adds the R to the character buffer.

It's slow work at first, but tests have shown that some people can get up to eight characters a minute. And that's eight more characters than there have been before for sufferers of spinal cord injuries.

"This is one of the first - and perhaps most useful - integrations of brain-computer interface techniques with Internet technologies to date," says Schalk.

A video of the setup can be found here.