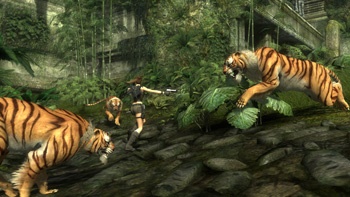 The Square-Enix takeover of Tomb Raider publisher Eidos has been sanctioned and will go into effect tomorrow morning.

The JRPG giant was first rumored to be interested in the troubled British publisher way back in December, and with 85% of them voting to proceed.

Today, a court has approved the takeover, Eidos announced:

"The Board of Eidos is pleased to announce that the Court sanctioned the Scheme at the Court Hearing held today and that it also confirmed the associated Capital Reduction at that hearing... As previously announced, the Scheme is expected to become effective on 22 April 2009 following the delivery of the Court Order to the Registrar of Companies and the registration by him of such Court Order."

Dealings in Eidos shares via the London Stock Exchange have been suspended, and will be officially canceled at 8:00 AM (London time) tomorrow morning.

The acquisition of Eidos is generally seen to be part of an effort by Square-Enix - known for its JRPG franchises like Final Fantasy, Dragon Quest (or Dragon Warrior), and Kingdom Hearts - to branch out and establish a stronger base amongst Western gamers. Earlier this year, Square-Enix announced that it would be making its games available on Valve's popular Steam service. Also, they just unveiled a Geometry Wars clone.

When all is said and done, this will put franchises like Tomb Raider, Hitman and Deus Ex under the Square-Enix banner - Lara Croft, Agent 47, and JC Denton having luncheon with Square's various androgynous and underage heroes, so to speak.

Well, if the next Tomb Raider features Lara in an outfit made entirely out of leather belts, we'll know who to blame.

(If you imagine the tigers in the image all have gigantic hair and swords, then it's almost like a political cartoon - true story!)