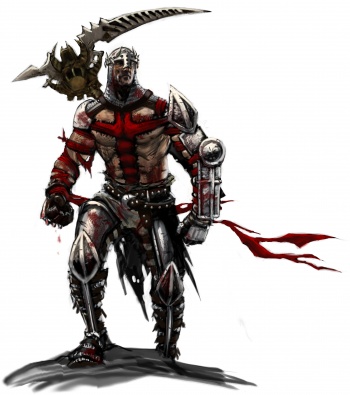 PSP owners will be able to get their dose of medieval demon slaying action next year when EA Redwood Shores' Dante's Inferno comes to Sony's handheld.

I've given Dante's Inferno a lot of flack (or should I say hell) for not only taking liberties with its source material but for sounding like just another action game in the vein of Devil May Cry or God of War, quick-time events and all. Neither criticism's really fair: the appropriation and reimagining of ideas is, after all, something that has driven art since its origins (Dante's work included), and, as for how the game plays, well, we still haven't tried it yet, so who's to say anything?

Here's another similarity between the God of Wars of the world and Dante's Inferno, though. Like God of War's Chains of Olympus, Dante's Inferno's getting the handheld treatment in the form of a PSP version that claims to deliver the same level of gameplay that the console versions do.

Developed by EA Redwood Shores in conjunction with Montreal studio Artificial Mind and Movement, Dante's Inferno PSP is due for simultaneous release with the Xbox 360 and PS3 versions of the games next year.

"Our team and the team at A2M are taking the vision for Dante's Inferno and translating it directly to the PSP," said Jonathan Knight, executive producer of Dante's Inferno. "PSP owners can expect to get the same level of fast, responsive gameplay through all nine detailed and unique circles of hell we are aiming to achieve on the consoles."

So, a PSP version, PS3/360 version, and even an anime. EA seems to be banking big on Dante's Inferno, so when are we going to hear about the PC version, not to mention the inevitable on-rails scythe swinging game that will be the Wii version?