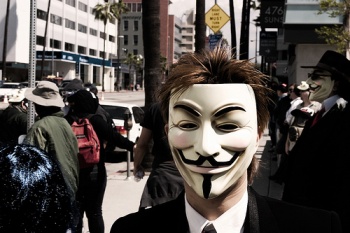 Earlier today, TIME declared 4chan founder moot the most influential person of 2009. That wasn't all they declared, though: The Top 100 list contains a secret message, and if you found it, well, you just lost The Game.

Of the 100 most influential people (as voted on by the Internet), here are the top 21:

Now, the founder of 4chan taking the first spot is kind of suspect, but so is the rest of the list: Really, Kobe Bryant and Lil' Wayne more influential than megapopular President Barack Obama or former Vice President nominee Sarah Palin? There are some people who shouldn't be in the top 20 who are, and some who should be but aren't. But you know what? That's okay, and as TIME Managing Editor Josh Tyrangiel points out, since it's an Internet poll, "Doubting the results is kind of the point."

But let's look at this one more time. Read the first letters of all the names on the list downward. It spells something:

If it were just "Marble Cake," then y'know what? I'd be inclined to chalk it up to a coincidence. But "The Game" - a notorious Internet meme with a time-honored pastime of reminding people about it when they least expect it? That's a bit harder to swallow.

Considering 4chan's obvious involvement in the whole thing, it feels a bit fishy. Also, it feels kind of hilarious: Has TIME - and consequently its international reader base - been pranked?

(For the record, I've been enjoying playing The Contest lately. If you think about The Contest, you win!)

Update: They sure have. (Thanks, Miral and Mythnomer!)