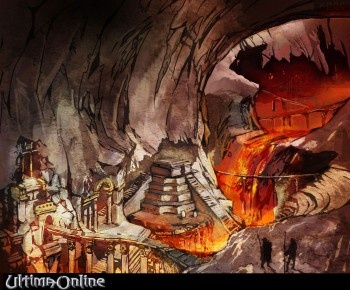 Mythic Entertainment has announced Ultima Online: Stygian Abyss, a new expansion to the famous Ultima MMOG that's been running for over a decade.

The Stygian Abyss expansion, the game's eighth, will introduce the Gargoyles as a playable race. Unlike their counterparts in most fantasy settings, gargoyles in the Ultima universe are "community minded and strongly principled," and famous for their crafting skills. The expansion will also add new skills and talents as well as all new lands to explore, including the Gargoyle homeland of Ter Mur and two levels of the infamous Stygian Abyss, first introduced in the 1992 RPG Ultima Underworld: The Stygian Abyss. The new expansion will feature the largest dungeon area ever to appear in Ultima Online.

"Ultima Online has a unique place in the history of online games - it was the first truly successful MMORPG and it showed that there was a real market for these types of games," said Mythic Vice President Mark Jacobs. "UO is still going strong and we can't wait to throw open the gates to the Stygian Abyss."

Players who descend into the depths of the Stygian Abyss will face a horde of boss monsters of "unparalleled difficulty" like the Medusa, the Primeval Lich and the Stygian Dragon. Other trials await in the dungeon's PvP zones, where players square off against the most dangerous enemies in the game - each other. And what of the Slasher of Veils himself, trapped in a weakening prison? Does his eternal malevolence still lurk, ready to ensnare the unwary?

Ultima Underworld: The Stygian Abyss was developed by Blue Sky Productions, later and better known as Looking Glass Studios. The groundbreaking game took place entirely within a huge, multi-level dungeon made up of numerous environments and featuring a true 3-D environment, inclined surfaces, a dynamic soundtrack and other technological advancements. It has been widely hailed as one of the most immersive and influential games ever created.

Ultima Online: Stygian Abyss is set for digital release this summer and will require the original Ultima Online client to play. More information is available at uoherald.com/stygianabyss.

Underworld Ascendant is More Than a Spiritual Successor Encaen 4 Comments