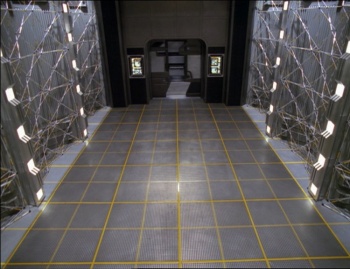 Robert Rice, CEO of Neogence, thinks that within five years, we'll have "something really darn close" to Star Trek's Holodeck - in fact, most of the technology already exists.

"Games are going to move out of the PC and the console and into the world around you," Rice said as he began his panel at Triangle Games Conference 2009, and pointed to the trend in mobile phones. First, the phones were just that - phones, and nothing else. Now, with the "Smart Phone" generation like the Blackberry and iPhone, you have devices that are still primarily mobile phones, but also surf the Internet. By 2012, Rice predicts that people will be buying Mobile Internet Devices: Wearable technology that allow users to interface with the Internet - oh, and they also make telephone calls, but that's secondary.

In 2012, Rice estimates that the average MID will have a 1GHz processor, a 20-megapixel HD camera, a hi-def screen, and a wireless broadband connection of 100 Mb/s - or more. Through these MIDs, people will be able to link data to objects: an "Internet of things," so to speak. He pointed to the TED tech demo of Pattie Maes's wearable "Sixth Sense of Information," where a projector directly displayed information about an object in question.

Maes has the right idea, Rice thinks, but not the right implementation. The projector needs to go - the real wave will be putting the information on transparent wearable displays like sunglasses: "This is where everything changes." Furthermore, the interface needs to evolve to the point where it's more intuitive and doesn't require any sort of real-life "markers," to where it's as simple as just pointing: "The first thing you learn as a child is to point at things to interface with the world."

A workable interface is crucial to the survivability of Augmented Reality as the genuine next step of media, argues Rice. Intuitive interfaces are the key - if you don't have an intuitive interface, the tech doesn't matter, because no one will adopt it. The real danger, Rice thinks, is for Augmented Reality to go the way of Virtual Reality and be seen as purely novelty tech. "[VR] was adopted way too early, with way too many problems. Hollywood got a hold of it, and it lost all credibility."

As for the Holodeck? Well, it won't have the force feedback, but Rice thinks the technology is "80% there." He envisions a world of gaming where a small MID - in, say, a gamer's belt buckle - wirelessly transmits to a visual device that is transparent (like a pair of sunglasses), displaying information on the screen. GPS technology and triangulation calculates the gamer's exact position, and tells him that there are four other people within a mile also logged in and playing the game. If he sees one of them, the display would, say, overlay the image with that of an enemy soldier: Games of Counterstrike could be "played in parking lots."

It isn't just gaming, either. "What if my kids could have Spongebob Squarepants in the living room?" Or what if the technology could be used by teachers to help an autistic student - who responds to learning by textures and colors better than normal teaching methods?

It isn't even a matter of thinking outside the box, Rice believes. "Reinvent the box. We need to think differently - all the rules are changing."