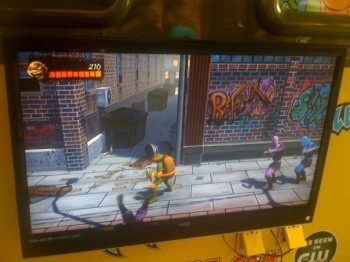 Turtles In Time surely ranks high among childhood favorites for any gamer who spent some part of their childhood trying to decide which of the Ninja Turtles was their favorite (Raphael's the best one, by the way), and that's not just nostalgia. The game, produced by Konami in 1991 for arcades and then later ported to Super NES, is arguably one of the better sidescrolling beat-em-ups from an era crammed full of them.

Which makes you wonder, with the revitalized commercial viability of the TMNT brand, why it took so long for Ubisoft and Konami to remake the game. In any case, here it is, revealed by a TMNT fan who attended a Galabunga event in New York City last week: the Turtles in Time remake for Xbox Live Arcade.

"The game is basically Turtles in Time with new graphics," the fan, roseangelo, blogs. Gameplay's in 2D but everything else - the backgrounds, the character models - are rendered in 3D. The music is exactly the same, apparently, but one of the boss fights is different from the fight in the SNES version, leading some fans to speculate that the game is based on the arcade version.

Turtles In Time is currently only in development for XBLA, but apparently might be coming to WiiWare as well. No word on release date, pricing or any online multiplayer options.