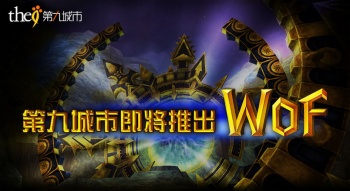 The9, the former WoW operator in China, has struck back at Blizzard by announcing its new MMO, World of Fight - apparently a cheap imitation of WoW, with a pinch of Warhammer thrown in.

You know, I kind of understand where The9 is coming from. First, you're the operator of the world's most popular mega-MMO in its largest market, and probably raking in cash hand over fist. Then, back in April, Blizzard announces that it was moving to sign a contract with The9's competitor NetEase, who would be the game's new operator. Understandably, The9 might be feeling kind of slighted, hurt in their pride as well as in their pocketbook.

If you can't beat 'em, make a cheap knockoff. Enter World of Fight. Incidentally, the new game's official site is "wofchina.com" - just one letter removed from the official WoW China site, "wowchina.com." Yes, The9, we see what you did there.

There aren't any real screenshots yet, so it's hard to make assumptions about whether or not the rest of the game will follow suit in, er, drawing inspiration from Blizzard. Judging by the familiar font of the logo, though? Yeah, I wouldn't hold my breath.

Interestingly enough, fans have pointed out that the structure portrayed on the official site bears more than a passing resemblance to a Chaos Gate from Warhammer Online: Age of Reckoning. Now, hold on a minute: EA owns shares in The9, and EA also owns Mythic - and publishes WAR. It's likely just a coincidence, and one would hope that The9 would have enough confidence in the Warhammer brand name to not have to shamelessly rebrand it over there (though Warhammer probably doesn't have the pull in Asian markets as it does in the West). Still, it's an odd little tidbit that makes one go "hmmm..."

In all likelihood, though, this is just The9 creating a knockoff - or shanzai - of World of Warcraft in order to try and keep the WoW players who would otherwise be jumping ship. This wouldn't be the first time something like this has happened: After Shanda Interactive Entertainment lost the license for South Korean MMO Legend of Mir 2 in 2003, they fired back by launching World of Legend.

(The Wall Street Journal, via Kotaku)