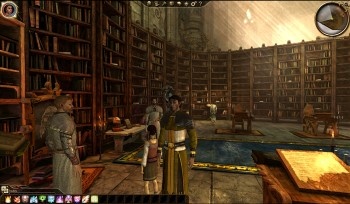 BioWare is teaming up with Green Ronin Publishing to launch a pen and paper RPG based on its upcoming new game Dragon Age: Origins.

Set to launch in summer 2009, the initial Dragon Age RPG will come as a boxed set, with additional sets and supplemental books planned for the future. Founded in 2000, Green Ronin has published numerous role-playing games and support materials based on the D20 system including Mutants & Masterminds, True20 and A Song of Ice and Fire.

"Dragon Age: Origins has been described as the spiritual successor to BioWare's Baldur's Gate, one of the most highly-acclaimed fantasy computer RPGs in the world, so when BioWare approached us to do a pen and paper version, we had to say 'Yes!'," said Chris Pramas, president of Green Ronin Publishing. "With our work on Warhammer Fantasy Roleplay, Black Company, and Thieves' World, dark fantasy is in our blood and Dragon Age: Origins is the best in its class. An opportunity to collaborate with BioWare on Dragon Age: Origins was not to be missed."

"We're excited to deliver Dragon Age's unique dark, heroic fantasy to our audience in a brand new way - a perfect complement to the landmark game we're launching," added Bioware CEO Ray Muzyka. "Our development teams craft rich, deep worlds, and this is an excellent way to expand the franchise."

Set in a gritty and brutal fantasy world, Dragon Age: Origins is billed as "a dark heroic fantasy game that combines original storytelling techniques with classic roleplaying." Chosen by the player, each character's origin story will shape his perceptions and motivations, and ultimately how he moves through the kingdom of Ferelden and beyond. Dragon Age: Origins is set for release in fall 2009 on the PC, Xbox 360 and PlayStation 3.