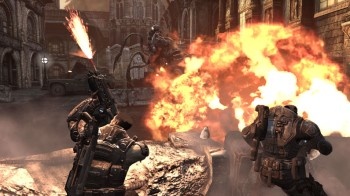 Cynical gamers might not be too happy about the thought of Gears of War being made into a movie, but one person is absolutely ecstatic about the progress the project's made: the man writing the script.

Seems that progress on the Gears of War movie is moving along extremely smoothly, according to screenwriter Chris Morgan. Apparently Morgan has finished a draft of the script and turned it in, and now the production team's just figuring out how to turn it into a full-fledged film. I imagine a lot of screenwriters are anxious about seeing their scripts go through what could turn into development hell, but Morgan seems definitively psyched. "It's looking incredibly good," he told MTV.

While the masses of skeptical gamers soured by dozens of bad game-to-move adaptations frown at the possibility of another trainwreck, Morgan thinks they've got nothing to worry about. "I think the gamer side is going to be thrilled with it," he said. "All the stuff you want to see, we put that in there and then we blow it out a little more, even. Now it's just a matter of honing in on all of the character arcs and determining production types of things"

Helming the director duties on the project is Len Wiseman, who handled the Underworld movies and Live Free Or Die Hard. Wiseman previously stated that he wanted the movie(s) to be like a "harder-edged" Lord of the Rings. Morgan seems to see the project taking on a similarly massive scope.

"It's huge," Morgan said. "One of the things they're really talking about now is the budget of the film and how big of a spectacle this is going to be. My argument is, look at the underlying material. Look at the game and the scenario - the fact that the world is being taken over by the Locust, it has to be huge."

Gears of War seems like a pretty readymade movie, but still, fingers crossed, guys. Pray that they'll get Vin Diesel. I don't care who he plays, I just want him in this movie. Because he's Vin Diesel.