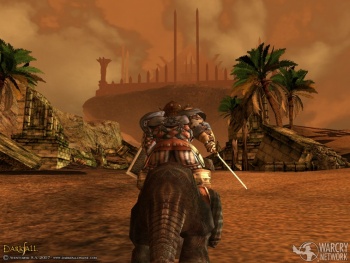 After long-delayed MMO Darkfall received a scathing 2/10 review from Eurogamer, the developers fired back, claiming that the reviewer had spent just under two hours logged in - not even playing the game.

Here's a quick recap to bring you up to speed if you've never heard of Darkfall Online: The game, announced in 2001, was for a very long time the MMO equivalent of Team Fortress 2 or Duke Nukem Forever - vaporware, doomed never to come out. It was an overly ambitious project, people claimed, and would only collapse under its own weight. Then, this February, Darkfall came out, largely slipping beneath the radar - but making a decent-sized splash for an indie MMO. Go figure.

Yesterday, Eurogamer finally published their review of Darkfall Online - and reviewer Ed Zitron gave the game an abysmal 2/10, saying that the game was effectively broken in every respect:

While other MMOs have relied on their players to fill in the content to an extent - Star Wars Galaxies being the most notable example - few have abused the sandbox mentality so readily as Aventurine. It's the emperor's new clothes of 2009: such a marvellous game that only an idiot wouldn't realise the beauty of the gaping holes in its content, its wonky control system, and its seemingly decade-old engine.

--wait, not so fast! Darkfall associate producer Tasos Flambouras responded to the Eurogamer review, calling it fraud. Not only was the review full of factual inaccuracies, Flambouras claimed, but their own server logs show that, of the two Darkfall press accounts Aventurine had given to Eurogamer, one had logged on for only three minutes, and the other "had less than 2 hours spread out in 13 sessions." Furthermore, said account wasn't actually playing the game most of the time: "Most of these 2 hours were spent in the character creator since during almost every one of the logins the reviewer spent the time creating a new character."

It doesn't end there, either. Eurogamer Editor Tom Bramwell defended Zitron, saying that the reviewer had played for longer than Flambouras was claiming, but also adding that they'd be getting a second opinion review as well. However, it wasn't enough for Flambouras, who posted a rebuttal suggesting that a reviewer would have to put more than a hundred hours into Darkfall to do it justice, since it's an MMO.

Whew. How 'bout them apples? On the one hand, part of me sympathizes with Zitron, because as a reviewer it can be so inconsistent how much time you need to sink into a game in order to give it a proper review. Do you always need to beat it from start to finish? What if it's a fighting game - how many hours do you need to play Street Fighter IV before you can talk about how satisfying beating peoples' faces in is? Do you really need to play Onechanbara: Bikini Samurai Squad for more than five, six hours, to understand that it's not a very good game?

But those aren't MMOs, and you don't want to know how much time I logged in, say, the Wrath of the Lich King beta for my review. Even if Zitron is telling the truth, and he played Darkfall for nine hours ... that might be enough for an offline game, but not an MMO. If Aventurine's server logs are correct, though ... well, that's another ballgame entirely.

In the meantime, though, we'll be content to pull up a chair, cook some popcorn, and watch the drama unfold.

(Thanks for the tip, WarCry!)

A View From the Road: MMOdern Warfare John Funk 24 Comments