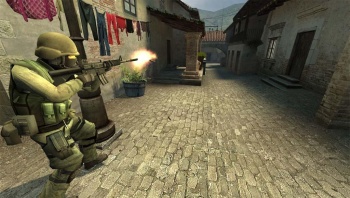 A Russian teenager is headed to the big house after murdering his friend over a game of Counter-Strike gone horribly wrong.

Alexander, a 14-year-old teenager, met 17-year-old Alexei at a Novosibirsk cyber café for a brisk, booze-fueled night of one-on-one Counter-Strike. The younger boy apparently got his ass kicked rather badly over the course of the evening and he didn't take it very well; "several fights" between the two had to be broken up by café staff. Nonetheless, the duo kept drinking and playing until Alexander finally decided he'd had enough and left.

He wasn't finished with Alexei, however, and when the older teen finally left the café at 3 am, Alexander and another friend were waiting for him. According to the website of the Novosibirsk Prosecutor's Office (Google translated), Alexander "inflicted multiple blows with hands and feet to the torso and head, from which the victim fell to the ground." At that point he began to jump on the victim's chest and kick him repeatedly; Alexei died on the scene as a result of the beating.

Alexander and his friend "half-buried" the body, which was discovered the next morning. In court, the teen claimed that his friend wasn't involved in either the killing or the attempted disposal of the body - apparently he just stood around and watched, which I guess is okay in Russia - and was eventually found guilty of "intentional infliction of grievous bodily harm" and sentenced to four years confinement in a juvenile prison.

Vodka, idiot teenagers, smack-talk run amok... There's probably a lesson to be learned in there somewhere but I just can't put my finger on it. I do wonder, however, why café staff didn't bounce both of them when they first started fighting. If they weren't so boozed up they could've beaten the crap out of each other out in the street, spit some teeth and then made their way home more or less intact.