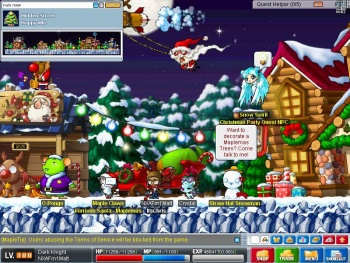 Everyone knows that MapleStory is big, but we had no idea that it's this big. The free-to-play MMOG has more than 92 million players, publisher Nexon revealed today.

And, four years after launching in North America, MapleStory has more than 92 million players worldwide. Believe it or not, the free-to-play 2D MMOG that's all the rage with the kids these days boasts an absolutely staggeringly huge playerbase, with six million of those players calling North America their home.

Sure, those numbers could probably be fudged to count inactive accounts, but the fact that MapleStory is a phenomenon is pretty hard to avoid. It's not just that there are people playing the game, publisher Nexon argues, but that there's a vibrant online culture surrounding it. "Players have turned MapleStory into an online video mainstay through blogs, community fan sites and fan videos," Nexon wrote in a press release. "Over 200,000 videos are available by searching MapleStory at YouTube."

A YouTube search for "MapleStory" reveals that Nexon aren't kidding around (though they did round the number up), as it returned "about 190,000" videos, including such treasures of the internet as "How to pick up girls in MapleStory," "MapleStory Geico Spoof" and "MapleStory Puke Contest."

The fourth anniversary celebration for the game will feature a number of special events in-game, including special anniversary weapon drops, item upgrades, and a prize giveway, among other happenings.

"We are very grateful to our loyal fans and this celebration is for them," Min Kim, Nexon America's Vice President of Marketing, said. "MapleStory fans have helped create something special and we're going to reward them with new, exciting content to enjoy throughout the summer and beyond."