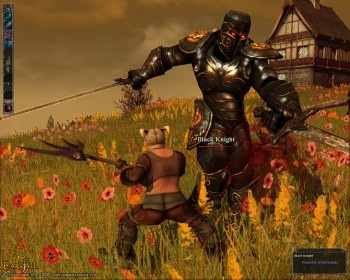 Aventurine has declined Eurogamer's offer of a "re-review" of Darkfall, which scored a highly controversial 2/10 in the original review, saying it would rather let the "fraud" stand than accept a few meaningless concessions.

The dust-up between Aventurine and Eurogamer began earlier this week when the site published Ed Zitron's remarkably harsh review of the MMOG Darkfall, which culminated in a horribly bad 2/10 score. But rather than meekly accepting the assessment, Aventurine fought back, accusing Zitron of fraud and/or incompetence - details of the back and forth can be read here.

Eurogamer eventually offered Aventurine a "do-over," with respected game journalist Kieron Gillen giving it a second look. But after some consideration, the Darkfall crew decided to pass, saying that as long as the original review isn't taken down - which Eurogamer has refused to do - a second review will do it no good.

"We don't need a re-review, we need a real review. We know for a fact that the original review is a fraud and yet Eurogamer stands by it," Aventurine developer Tasos Flambouras wrote in the Darkfall forum. "They should keep standing by it then or take it down based on the evidence we have offered them, the numerous factual errors and omissions, the feedback they're receiving on it, the reviewer's questionable track record, former similar accusations about him, and our word. These half baked measures to save face mean nothing while this assassination piece stands."

He said he spoke to Gillen after the offer was made and believes that while he's quite capable of doing a proper review of the game, he'd rather see Gillen do it for another publication instead of wasting his time and talent "mopping up" after Zitron. More to the point, Aventurine claims that having someone else review the game to see if he agrees with Ed is a wasted effort: "Ed is a fraud, there's nothing to agree with here as far as we're concerned," Flambouras wrote.

"If it's all the same to Eurogamer we'll just take it on the chin and stick with the original review. We don't need their concessions. If they can live with this, so can we," he continued. "2/10 from the likes of Ed Zitron is going to be a badge of honor for us. They can keep that fraud up as our memorial contribution to journalistic integrity and to independent games everywhere. At the very least they may think twice before they try doing this to someone else."

A View From the Road: MMOdern Warfare John Funk 24 Comments