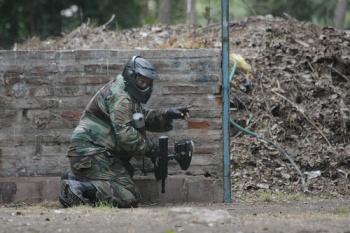 The German government intends to ban paintball as yet another reaction to the Winnenden school shooting in March.

The Social Democrat coalition government has agreed to outlaw "all games in which players shoot at each other with pellets," according to a report in the Telegraph, saying the act of shooting at other people even in a simulated environment "trivializes violence and risks lowering the threshold for committing violent acts." The government hopes to have the ban in place before September of this year; once enacted, the law could impose fines of up to $6800 .

The harsh measure is yet more fallout from the March 11 high school shooting at Winnenden in the German state of Baden-Württemberg, in which 15 students were murdered before the 17-year-old shooter killed himself. The shooting was linked to videogames through reports that the killer was a fan of Counter-Strike and Far Cry 2, and both police and government officials very quickly called for tougher regulation of gaming.

One wonders how far Germany will go to protect its youngsters from the "dangers" of violent gameplay. Paintball guns weren't even on the radar when I was a kid, so instead my friends and I ran around with rifle-shaped sticks making machine-gun noises at each other. Thousands of glorious battlefield deaths were inflicted and suffered in our imaginations; will German authorities someday try to bring that to a halt as well? Germany may still be a bit over-anxious about keeping a lid on some of its less-admirable national instincts - starting two world wars less than a half-century apart will have that effect - but how far can a government go in regulating fantasy before it topples over into outright paranoia?