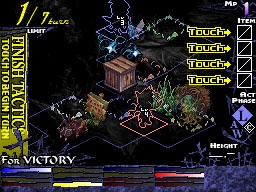 Knights in the Nightmare, Sting Entertainment's new strategy-RPG, looks ridiculously complicated. Publisher Atlus seems to be aware of this, because they're giving gamers a chance to get a feel for the game ahead of time with a DS demo downloadable via the Wii.

Even after reading scads of info and watching tutorial videos, I still can't really tell you how Knights in the Nightmare, the new DS SPRG by Sting Entertainment of Riviera and Yggdra Union fame, plays. It's like a shoot-em-up with stylus-based bullet-dodging, a SPRG with troops and an isometric battlefield, and a whole lot of other stuff that might make the game worth it in the end but will undoubtedly confound and bewilder you for the first couple hours. At least.

Luckily, publisher Atlus, who are no strangers to heinously difficult games with arcane mechanics, have foreseen that gamers might be a bit hesitant to dive into Knights in the Nightmare. So they're offering us an advance lesson in the rules of Knights via a tutorial demo. Downloadable for a limited time from the Wii's Nintendo Channel onto your DS, the demo is "the perfect step-by-step introduction" to things like "properly shifting between law and chaos modes, weapon management, special moves" and more.

It's nice to see a publisher giving gamers an advance taste of a niche game like this, but it's also a bit intimidating to consider that even Atlus knows that this game is so hard to wrap your head around that they need to put out a tutorial demo weeks in advance. Sigh. At least it's better than going to GameFAQs so some 12 year-old can explain to me how to play a game.