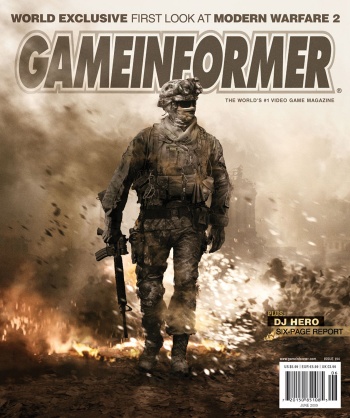 Modern Warfare 2 will sport co-op missions, open-ended levels, and the return of Soap MacTavish, according to details revealed in the latest issue of Game Informer.

Call of Duty 4: Modern Warfare set a new precedent for on-rails storytelling in games - who could forget when the nuke goes off at the end of "Shock and Awe" or when that helicopter crashed in "All Ghillied Up," crippling your commanding officer and forcing you to carry him and defend him from enemy troops with no more than a sniper rifle and some mines.

Modern Warfare 2, however, seems to be taking a slightly different approach to the design of its missions. According to the new issue of Game Informer (received and scanned by some lucky GiantBomb user), missions won't play out in such a linear fashion. Instead, the gameplay is "wide open and has a lot of variety," with the example given of a mission where the player is tasked with destroying an enemy camp's fuel supply. A radar-like device on his weapon makes stealth an option, but dodging vehicles and staying hidden requires good reflexes. On the other hand, going in guns blazing means that there'll be fewer bad guys to contend with later on in the mission.

While the gameplay is "open," the story, says Infinity Ward, will be "on rails" in typical Call of Duty fashion. Soap MacTavish, one of the player characters in COD4, returns as a "grizzled NPC vet," probably playing the role that Captain Price did in the last game. The events of the story follow the COD4's, with a new Russian terrorist/warlord threatening the safety of the world. No word on whether Price is still alive, but he better be.

Being that the "on rails" story seems to be very much focused on you, co-op will not be an option in campaign. Instead, Modern Warfare 2 will feature a separate mode with co-op missions that are supposedly in the spirit of the airplane mission that was the action-packed epilogue of COD4.

Finally, the campaign's reportedly longer than COD4, which was a short (albeit sweet) ride. Other complaints that Infinity Ward is addressing with the game include fixing infinite enemy respawns in campaign and adding a "live patching" system for updating the game without requiring annoying downloads.

More info and pretty screenshots are available in the upcoming issue of Game Informer.