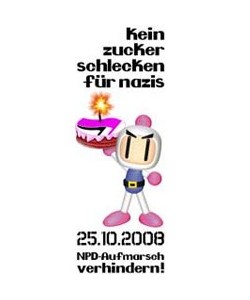 Germany has dropped its plan to outlaw paintball in favor of doing something even weirder: Authorities have charged a former politician with using Bomberman to incite violence against Nazis.

We should probably start at the beginning. Last week it was reported that Germany's Social Democrat coalition government had settled on a proposal to outlaw "all games in which players shoot at each other with pellets," a measure which covers a lot of ground but is obviously aimed squarely at paintball. The decision was part of the ongoing reaction to the Winnenden school shooting in March, in which 15 students were killed.

But the proposal to ban the sport has now been dropped, according to The Local (via GamePolitics), although legislators are still considering other restrictions against paintball, such as increasing the age at which people can legally play the game. Paintball in Germany is currently restricted to people 18 years of age or older, and the site says players "generally" do not wear military fatigues when playing as they do in other countries.

What led to the change of heart? Perhaps it was common sense, or perhaps the German authorities were forced to divert their resources to more critical cases such as that of Martin Budich, who has been charged with invoking violent acts against Nazis by posting a Bomberman image on his website. The image, which was actually created by a group of leftist activists, shows Bomberman holding a cake with a fuse for a candle along with a message that roughly translates to, "No cakewalk for Nazis."

The problem? The image was posted to protest a demonstration by Nazis in October 2008, which was met with a counter-protest by left-wing opposition. Shockingly, outbursts of violence apparently took place when the two sides came together and because Bomberman's fuse-topped cake was obviously just a cleverly-disguised bomb meant to be thrown at the Nazi crowd, it was Budich's fault. And in case you think the charges will never stick, Negative Gamer points out that Budich was convicted of similar charges in 2003 for using an anti-Nazi poster featuring a cartoon character aiming a slingshot.

And you thought Japan was strange.