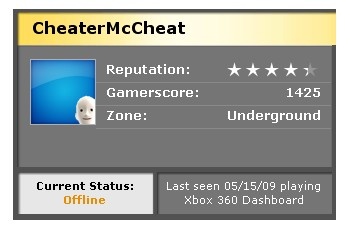 Microsoft says gamers caught cheating on Xbox Live will have their Gamercards permanently tagged so the whole world will know what a dirty rotten filthy cheating dog they really are.

Currently, gamers caught cheating on Xbox Live via glitches, exploits and external software face having their Gamerscore reset to zero and the loss of any Achievements they may have racked up; furthermore, any Achievements lost this way cannot be regained, even through legitimate means. But Stephen Toulouse of Xbox Live said in the most recent Major Nelson podcast that the punishment for cheating will go beyond even that. "The bar is a little bit higher than that," he said. "The other thing it does is, it puts a tag that you've been cheating on your Gamercard. That's a pretty big Scarlet Letter."

Toulouse added that Microsoft would take steps to be "absolutely sure" a gamer was cheating before adding the tag to his Gamercard. Despite that, it's almost certain that at least a few gamers will be falsely accused of cheating, so hopefully some form of appeals process will also be put into place.

Losing Achievements is bad enough but public humiliation is a whole different ballgame. On the other hand, cheating in videogames is lame and you shouldn't be doing it, so on the whole this sounds like a pretty good idea to me.