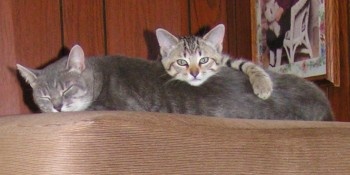 Science Newsflash: A new study has determined that people who are exposed to high dosages of cuteness actually perform better at certain dexterity-related tasks associated with caregiving.

Science. It cures diseases, it opens the dark void of space to exploration and sometimes it examines the role of "infantile physical morphology" in enhancing "behavioral carefulness" as it applies to caring for small children. In the latter case, researchers Gary D. Sherman, Jonathan Haidt and James A. Coan of the University of Virginia exposed 40 female students to images of high cuteness (puppies and kittens) and low cuteness (dogs and cats), after which they played a rousing game of the classic Hasbro game Operation. Other tests, including a questionnaire and a measure of grip strength, were also taken.

The results? Exposure to high levels of cuteness had not only an emotional but also a physical impact on the test subjects, who showed "significantly greater improvement in performance (from before to after the slide show) on the operation task in the high-cuteness condition than in the low-cuteness condition."

Remember, kids, this is science, so pay attention.

In order to rule out "extraneous influences," a second experiment was performed in which 56 students (23 women and 33 men) were exposed to a new set of images, also ranked as low or high cuteness, and then played the game. The results verified the findings of the first test: Cuteness not only makes you feel better, it makes you do better.

"In two experiments, we found that exposure to images of young, cute animals (kittens and puppies) increased performance on a task that demanded extreme carefulness in order to successfully execute finely tuned motor movements (the children's game Operation), an effect that cannot be attributed to general positivity (eg., mood or specific positive emotion) or arousal (measure via self-report and autonomic physiology)," the researchers reported (available here, PDF format). "This finding suggests that cuteness does not just influence one's willingness to engage in caregiving behaviors but also influences the ability of one to do so. That is, cuteness not only compels us to care for cute things but also prepares us to do so via its effects on behavioral carefulness."

Let's consider this from the gamer's perspective, shall we? Upside: Shooter fans looking for an edge in online combat can spend a few minutes at Cute Overload for a quick, scientifically-verified dexterity bonus that will help them get the drop on the enemy. Downside: The humiliating death that follows when, after getting the drop on the aforementioned enemy, it's discovered that the killer instinct has been unexpectedly replaced with an overwhelming desire to nurture and cuddle.

But don't feel too badly about it. It's science.