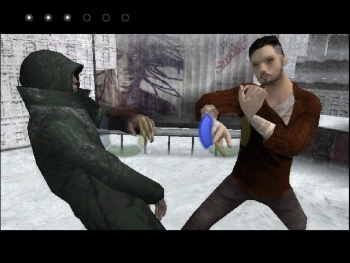 Quantic Dream CEO David Cage has thought about the possibility of a sequel to Indigo Prophecy before, but after careful consideration, he decided that it's time to move on.

Indigo Prophecy, otherwise known as Fahrenheit in the non-USA parts of the world, should stand as a memorable experience for most people who got the chance to play through the entire game.

While it started as a gritty urban adventure game filled with psychological weirdness and QTEs, it eventually turned into something very, very, very different, leaving some gamers wishing to never hear of the game again and others compelled to experience more of developer Quantic Dream's idiosyncratic vision.

The people in the former category probably have gotten their wish, according to what director David Cage had to say in an interview with 1UP. According to Cage, Indigo Prophecy 2 was a very nearly a reality. After the release of the first game, "when we started talking to publishers, many of them told us they loved Indigo and they were interested in publishing the sequel."

So Cage started dreaming up Indigo Prophecy 2. That's when he realized the game just wasn't in him any more, none of it. "So I started thinking of Indigo 2 but I quickly realized I had nothing more to say on this story and these characters," Cage recalled. "I really enjoyed the time I spent with them, but they were attached to a moment in my life, and I had moved on."

Instead, he "wanted to write something more personal, deeper, more adult, with no world to save and no supernatural powers." Those ambitions may be made manifest in Quantic Dream's next game, the still-enigmatic Heavy Rain.

So if you were hoping for another game full of over-the-top Dragonball Z-style fights with Mayan hobos, I'm sorry to say that it sounds like Quantic Dream has moved on. Never say never, though.