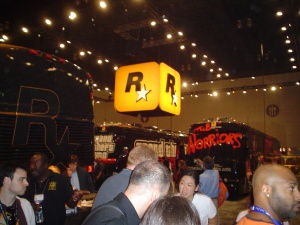 Hopes are high for E3 in 2009 but despite the hype Entertainment Software Association CEO Michael Gallagher says it will not be a return to the E3 of old.

E3 changed format dramatically in 2007, changing dates and venues and restricting attendance to "invitation only," and the results weren't pretty. Exhibitors and journalists alike came away dissatisfied and the show generated none of the "buzz" of previous years. In 2008 the situation got worse as various high-profile companies declined to take part in the show or parted ways with the ESA entirely; other events, meanwhile, like Leipzig and the Penny Arcade Expo quickly eclipsed the gelded E3 in the hearts and minds of gamers.

In response, the ESA announced that the 2009 show would be "the must-attend event of the year," with bigger booths, increased audience size and an expanded number of exhibitors. Specifics were a bit hazy but Electronic Arts CEO John Riccitiello said the 2009 show would be "the pre-eminent North American gaming show... better for industry leaders and for serious gamers," while Ubisoft's Laurent Detoc went even further, claiming it would be the first "real E3" since 2006.

But with the show rapidly approaching, ESA Chief Executive Michael Gallagher has said that despite the upgrades, the new E3 won't be like the old E3. "I came aboard one month before the first of the small shows. The Santa Monica event was really my first exposure to the industry in a broader way - I had never been to any of the prior E3s," he told GameDaily. "Last year we made some improvements based upon the input we received, but this show is not a return to the old E3."

"It is definitely much more reflective of the energy, excitement and creativity of our industry, but I wouldn't say it's our first 'big E3' or a return to the old one," he continued. "It's a show based upon what the industry needs to project as an image of the excitement we have in the pipeline for the rest of the year. It's the right show; it's not a particular reference to any prior year."

Gallagher said over 200 companies would have their wares on display and predicted an attendance of around 40,000. "It's going to be a lot more high energy and that's precisely what the industry needs right now," he said.