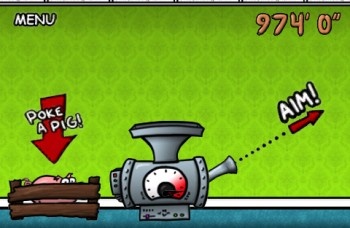 Apple has rejected Hot Dog Down a Hallway, a new iPhone game from Metaversal Studios, because it contains "sexual innuendo" - yet an earlier version of the game remains on sale at the App Store.

The game is simple enough: Set the power and angle of a high-powered meat grinder, shove a pig into it and try to shoot a hotdog down a hallway as far as you can, tilting the phone to catch powerups and avoid obstacles along the way. It actually sounds like fun, but it's hard to argue there's not a certain giggling sexual undertone to the whole thing: Aside from the name itself, the game's Achievements include gems like "Scratching Won't Help," "Watch the Teeth" and "Can't Feel the Sides."

All of which added up to a big fat "No thanks" from Apple, which exercises final say over what does and does not go up for sale at the App Store and has rejected "objectionable" content numerous times in the past. The problem in this particular case appears to be the fact that while the latest version of Hot Dog Down a Hallway got the thumbs down, two earlier versions of the game were approved and remain available for purchase.

A number of questionable rejections of iPhone applications has led to growing criticism that Apple's approval process is both arbitrary and capricious; Trent Reznor had some harsh words for the company when a Nine Inch Nails app was rejected for referencing the group's 1994 release The Downward Spiral (available for purchase via iTunes) while the developer of rejected app Me So Holy, which lets users paste pictures of themselves into templates of religious figures like Jesus asked why "sex, urine, and defecation don't seem to be off-limits, yet a totally non-violent, religion-based app is."

Metaversal Studios noted that version 1.2 of the game contains no change in content from the previous two versions, which were approved, and pointed out that "despite the suggestive name, still contains absolutely no sexually explicit content."

"There is nothing more explicit in this game than what can be seen in a weekly episode of The Simpsons," said Ed Mathews, director of business development at Metaversal. "I'm perplexed by Apple's definition of 'Explicit Material'. When double entendre and humorous language are considered contraband, Apple opens up a Pandora's Box that the entire game industry should be concerned about."

Designer Dave Landry said the "iTunes censorship policy is still a mystery to us," but added that he hoped the game will be allowed to remain on sale at least until the iPhone parental controls become available. Apple has said parental controls will be included with iPhone OS 3.0, but no release date for that software has been set. Apple did not respond when asked why the latest version of Hot Dog Down a Hallway was rejected while earlier versions remain on sale.

Now, has anyone seen my car keys?