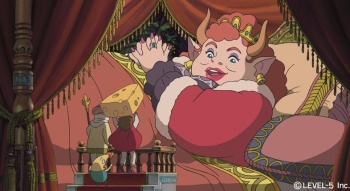 Professor Layton developers Level-5 have to be pretty happy to have legendary anime creators Studio Ghibli working on the cutscenes for their new DS game. But why is it taking so damn long?

Announced last September, Ninokuni is a fantasy RPG developed by Professor Layton and Dark Cloud creators Level-5 in collaboration with Studio Ghibli, the much-loved animation studio responsible for movies like Spirited Away and My Neighbor Totoro. Apparently Ghibli's only responsible for about 15 minutes of animated cutscenes that'll appear in the final game - so why has it taken them ten months to produce it?

Because Studio Ghibli never half-asses anything, that's why. "When Ghibli has its entire staff working on a project, they can produce about five minutes' worth of theater-quality animation a month," Ghibli president Toshio Suzuki said in an interview with Famitsu transcribed by 1UP. "I wasn't planning for this to take longer than three months, at worst! But that's the way it always happens. Ghibli always works at that theater-level of quality."

The partnership came as a surprise to many, considering studio co-founder Hayao Miyazaki has been a vocal critic of videogames. Indeed, Suzuki recalled that the studio has been approached many times in the past to do videogame work, but has always turned down offers. Why make an exception for Level-5, then? Timing is everything.

"The entirety of Ghibli was free of work at just that moment," Naoya Fujimaki, a composer who works with both Ghibli and Level-5, said. "Miyazaki may say he hates games, but being a businessman, Suzuki isn't going to just let his staff play around all day."

So he works them for ten months to produce 15 minutes of cutscenes. Man. Check out the Ninokuni trailer here to get a taste of the products of their labor.

Gallery of the Day: 8 of the Best Movies from Studio Ghibli DrStrangelove 6 Comments

MovieBob - Intermission: As The Wind Rises Comes To The US, So Does The Controversy MovieBob 54 Comments