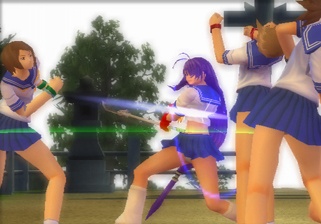 Ikki Tousen: Shining Dragon, a beat-em-up in which scantily clad female college students unleash moves that shred up their opponents' clothes, was rated M by the ESRB, leading publisher Valcon Games to halt plans to bring the game to the US.

If you thought Street Fighter's Sakura had the market cornered on panty shots in videogames, you obviously haven't heard of Ikki Tousen: Shining Dragon for the PS2. In this brawler, short-skirted and busty female college students do battle with one another, resulting in a barrage of panty shots as high kicks are thrown as well as plenty other sights for naughty boys to see.

The most unique feature? Something called "battle damage," which is really just a euphemism for the ability to use moves that, as the ESRB says in its product description, allow "some characters to rip opponents' clothes to shreds - exposing even more of the female anatomy (legs, breasts, partial buttocks)."

The ESRB slapped a big fat M for Mature rating on Ikki Tousen, which evidently forced publisher Valcon Games to put an end to all plans to bring the game to the US.

"A number of factors really hurt our options with that game. The biggest problem being that it received an M rating from the ESRB," Colin Goron of Valcon said. "We could remove all the stuff that makes it an M-rated game, but then we don't think the customers would be very happy buying an Ikki Tousen game without all the shredded clothing..."

The man clearly knows his audience.

So pity poor Ikki Tousen: Shining Dragon. In a world where Dead or Alive games can succeed and something as gratuitous in its over-the-top T&A-worship as Atlus'Super Robot Taisen OG Saga: Endless Frontier can make it by with a Teen rating, Ikki Tousen will never get its chance to shine. What harm has a little "battle damage" ever done to society?