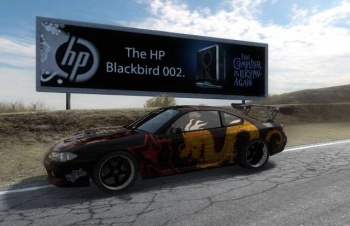 Phew, that's a lot of in-game billboards. It doesn't seem like it's been all that long since we first heard rumors about advertisements for real-life products being displayed in a virtual space. Since then, ad gurus have struggled to catch up after the dawning realization that the crucial 18-to-25 year-old male demographic has ditched TV for a more interactive form of entertainment.

Where they go, the ad money follows. And quite a bit of ad money has followed them to videogames. In-game advertisements proudly hawk a variety of different products: Some advertise other games by the same studio, some advertise wholly unrelated products, and, well, some advertise President Barack Obama.

Despite "short-term softness" in the advertising industry this year thanks to the global economic downturn, analysts at Screen Digest predict that in-game ads are here to stay, and will only become more and more commonplace - especially as the economy picks back up again. Within five years, say the analysts, ad agencies will be spending a total $1 billion on all in-game advertising, seeing it as a way to tout their products to those who are becoming "increasingly hard to reach via other media." That's ad-speak for "we wish you would go back to watching TV again, guys," by the way.

You know, as long as they do it tastefully - and without breaking immersion - I'm fine with it. Real ads lining the stadium walls in a FIFA title, or billboards along the road in the next Need For Speed? That's totally fine, and even helps to further the sense of immersion. Having the androgynous lead character of a standard Square JRPG chug down a brisk can of Coca-Cola before whipping out his Cutco(R) brand sword? Slightly less fine.

A Letter from the Publisher Archon Comments