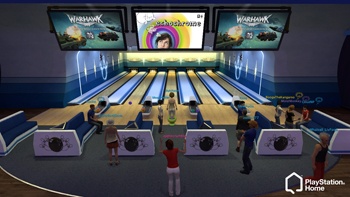 After an initial peak of interest followed by a dip in activity, PlayStation Home's active user base is now on the upswing, according to Home director Peter Edward.

PlayStation Home has had a reputation for being the biggest budgeted ghost town of all of gaming's virtual worlds, but that might not actually be the case, according to Home director Peter Edward. While the feature saw very little use after an initial surge of interest following its debut, people are apparently going back Home, and they're staying there.

"There's more and more content going in, there are more things to do, and people come back to have a look around - and then they realize there's loads of content," Edward explained. "We're at the point now where we're starting to see our active user base go up, and we're getting more people coming back than are leaving, so we're at the tipping point of where the platform starts to gain momentum."

While Edward understands why publishers and third parties have been skeptical about putting content into Home in the past, he believes things are now turning in the other direction. "I think once you've got third parties realizing that it has a positive effect, then they put more content on there, and you're at the point where you can be fairly confident you've got something that's working," he said.

PS3 owners, is it actually working? Have you gone back to Home and is there content compelling enough, beyond the Street Fighter IV costumes and silly dances, to make you stick around?