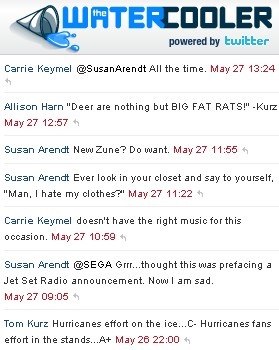 Twitter's co-founders are considering ways to generate revenue with the popular online messaging service, including the possibility of charging for some premium services.

Speaking at the Wall Street Journal's D: All Things Digital conference, Twitter co-founders Evan Williams and Biz Stone said they will eventually begin charging fees for the company's services. "There will be a moment when you can fill out a form or something and give us money," Williams said. "We're working on it right now."

The pair didn't elaborate on which parts of Twitter might eventually require payment, although they suggested a service that would authenticate senders as a a possible revenue generator, citing as an example Dunkin' Donuts paying to ensure that nobody sends tweets using its name. Banner ads are also a possibility, although Williams sounded rather cool toward the idea, saying, "I think it's probably the least interesting thing we could do."

But as many popular online services have found, transitioning from a free service to any form of pay-to-use model is a huge challenge. Williams said that while they're hopeful to be generating revenues by the end of the year, the priority is to build a "long-term, sustainable business."

"There's a key difference between value and profit and we need to build value first," Stone said in a brief follow-up interview with the Wall Street Journal, adding that growing the network, making it robust and adding features that users want are among the company's priorities.

"That being said, we do want to focus on generating some revenue by the end of the year to show people that Twitter is here to stay," he continued. "The goal is to begin iterating, to start showing signs of life in that respect."

With virtually every other source of online communication available free, the odds of Twitter charging for individual use are virtually zero. The real question seems to be whether it can add enough "value," and stay sufficiently relevant, to generate income in other ways. Not an insurmountable task, perhaps, but as ICQ found out, certainly not an easy one either.