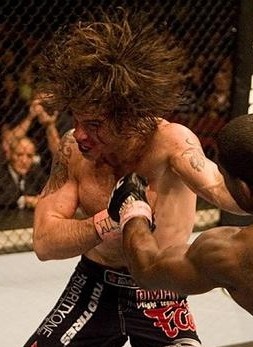 MMA fans might notice that respected lightweight Clay "The Carpenter" Guida is missing from the recently released fighting game UFC Undisputed 2009, but there's a very good reason for his absence: The man has crazy, crazy hair.

Guida, with a professional record of 25-9, has been a UFC stalwart since coming to the organization in 2006. He's earned a reputation for his outstanding cardio, relentlessness in the ring, his friendly demeanor - and his flying, wild-man hairdo. I don't understand how he can even see, much less fight, but it seems to work for him.

It didn't work for THQ, however, which ran into clipping and collision detection issues caused by his hair that made his character almost unplayable. According to reports, THQ actually offered Guida money to get a haircut so they could keep him in the game, but Clay was true to the 'do and said no.

Is hair really that complicated? Clay Guida's is no ordinary coiffure, true, but, it's possible that THQ was just being lazy; the developers reportedly resolved other issues caused by left-handed fighters by simply making everyone in the game a rightie.