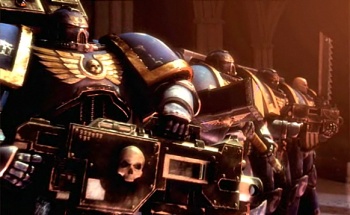 Veteran Warhammer 40,000 developer Relic Entertainment has unveiled Warhammer 40k: Space Marine, a console action RPG featuring the titular zealots as they fanatically battle for the glory of the Emperor, or something like that.

Okay, I gotta admit something here: I've never been all that interested in Warhammer 40k's Space Marines. In fact, I've always found them kind of boring in their religious zeal (and the religious zeal that they inspire in Warhammer fanboys, too) and ridiculous over-the-top enhancements that let them fight everywhere with everyone forever, or however it goes. I'll take a Sgt. Avery Johnson or Jim Raynor any day of the week, thank you very much.

That said, the Warhammer 40k world is one that provides a heaping helping of potential content for a skilled developer, and Vancouver-based Relic Entertainment has made me fond of the Emperor's Finest at least once before. While Dawn of War II reveled in blurring the lines between RTS and action RPG, Relic and publisher THQ have booted the RTS part out of the door with the official unveiling of Warhammer 40k: Space Marine.

As with all official game reveals, there's a standard press release filled with boring boilerplate PR text, if that's your thing. Significantly more interesting, though, is the battle trailer hosted over at IGN. Relic's had a lot of practice with their Space Marines over the years, so it's no surprise they seem to have nailed the look and feel of the world, if the trailer is any indication. Yeah, it's a trailer, and trailers are admittedly made to make their games look as awesome as possible... but I gotta say, I'm liking what I see. The game looks fast, visceral, and entertaining as all hell.

It's likely - though not 100% certain - that this is the same game that saw leaked footage hit the 'Net last September. After all, Games Workshop is notoriously protective of its IPs - two competing third-person action games based on its grim vision of the future would only confuse consumers. So make of that what you will.

Space Marine is reportedly in development for both the Xbox 360 and PlayStation 3. Remember, kids: It's like Gears of War, except the chainsaw is on the sword, not the gun.*

*(This was a joke, 40k fanboys. Thus far, the only things we know that Gears and Space Marine have in common are: Lots of blood, third-person perspective, and a fondness for combining chainsaws with other types of weaponry. Heck, Space Marine might not even have a cover system.)