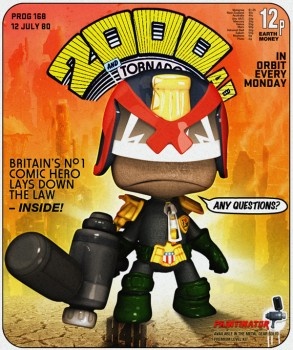 Launching today, the 2000 AD costume pack includes Judge Dredd, Judge Anderson, Rogue Trooper, Johnny Alpha and Hammerstein, along with 17 2000 AD-themed stickers. The costumes are available individually for $1.99 or as a complete set for $5.99.

To mark the release, Media Molecule also posted a quick interview with Pat Mills, one of the creators of the 2000 AD comic book. He suggested that anyone unfamiliar with the stories and characters begin with Judge Dredd as well as graphic novels like Slaine the Horned God and Judge Dredd: Cursed Earth; to those fine suggestions I would add two of my own, Rogue Trooper: War Machine, the 1993 remake of the Rogue Trooper origin story, and for laughs, the Simon Bisley-illustrated Batman/Judge Dredd crossover Judgment on Gotham.

Images of the costumes in action as well as background information on the characters they're based on have been posted on mediamolecule.com. I don't own LittleBigPlanet but if I did I'd be on this pack in a second. A Judge Dredd Sackboy with a Paintinator Lawgiver? My heart melts.

Name Game: Get It Together Leels 28 Comments