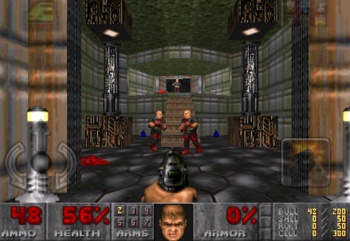 Some people start stamp collections as side projects to kill some time. John Carmack takes classic id Software games and ports them to iPhone. And then he talks about them in extreme detail.

The iPhone is the biggest thing since rocket jumping for id Software mastermind John Carmack. He singlehandedly programmed and released a port of Wolfenstein 3D for Apple's phone a couple months ago, but as he writes in a blog, that "was just a quickie project to satisfy my curiosity and test the iPhone waters." The iPhone port of Doom, on the other hand, is a "more serious effort."

"Making Doom run on a new platform is only a couple days of work," Carmack said. "Making it a really good game on a platform that doesn't have a keyboard and mouse or an excess of processing power is an honest development effort."

The biggest hurdle he faced, Carmack wrote, was the question of handle the game's art. In addition to some technical issues, Carmack noted that there was significant backlash against the new graphics he'd put in the Wolfenstein remake. Ultimately, he decided not to do anything to the source art.

That's not to say this is just Doom as it was. Carmack seems to think it's a lot better than the original, which he'll admit doesn't exactly hold up in spite of all the nostalgia. "With the speed...the audio, the resolution, and the rendering quality, it is Doom as you remember it, which is quite a bit better than it actually was," he wrote. "A lot of people remember it as 'The best game EVER!', but 'ever' has sure moved a lot in the last decade!"

Doom iPhone will support Wi-Fi multiplayer, and, after the iPhone's 3.0 firmware is released, Bluetooth-supported battling. Carmack tried out online multiplayer over 3G, but said it just didn't work out because of crummy latencies. It should be out next month.

And it seems this isn't the end of Carmack's love affair with the iPhone, not by a long shot.

"The fact that people are downloading Myst on the iPhone is heartening -- I have ideas for leveraging our high end idTech-5 content creation pipeline for a future iPhone game, if people will go for a few hundred meg download," Carmack said.