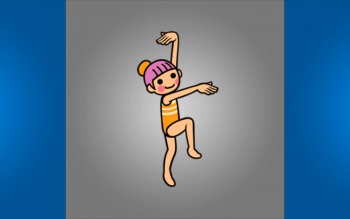 As an inexpensive way to please Rhythm Heaven's rabid fanbase (read: those gamers who imported Rhythm Tengoku well before Nintendo announced plans to bring the series to America) the visualizer ranks alongside the free screensavers that are offered de riguer with every film and game release these days.

It does nothing but slap the game's art assets on top of whatever tunes you're listening to via Apple's omnipresent audio player.

Realistically there is no good reason to be so excited about it.

Except that this is suddenly the new de facto standard visual accompaniment with every song I listen to.

After seeing Offworld's effervescent rant on the thing I was doubtful it could live up to the praise, but anyone with any love for Nintendo's quirky rhythm series should most definitely download the iTunes add-on.