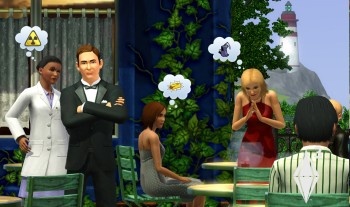 The Sims 3 has made a big splash on torrent sites, with nearly 200,000 downloads in a very short space of time.

If popularity was based solely on how much a game was pirated, The Sims 3 is a certified, chart-topping hit. It was downloaded 180,000 times between May 18th - 21st, an average of 45,000 downloads a day, says BigChampagne, a company that monitors file-sharing.

If the numbers are accurate, it means that the The Sims 3 has overtaken Spore as the fastest downloaded in recent history, although Spore's high piracy rate was, at least in part, to EA's draconian SecuROM DRM software, something that The Sims 3 lacks.

But according to EA, there's still plenty of incentive for people who downloaded it to pick up a legitimate copy, "The pirated version is a buggy, pre-final build of the game," said EA's Director of Corporate Communications Holly Rockwood. "It's not the full game. Half the world - an entire city - is missing from the pirated copy."

The Sims 3 is released on June 2nd in North America, June 4th in Australia and June 5th in Europe.