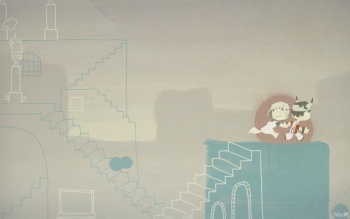 ICO will be manifesting itself in LittleBigPlanet in some shape or form sometime soon, judging from a teaser picture Media Molecule released showing Sackboy versions of Ico and Yorda.

Sackboy Zangief was pretty good, as were Sackboy Snake and Meryl. Sackboy versions of Ico and Yorda, though? I think that takes the cake. The couple made their debut recently, when mysterious art surfaced online showing a Sackboy Ico running with Yorda in tow through what looks like an LBP-ized version of an ICO stage.

Some beautifully done fan art produced to tug at wishful thinkers' heartstrings? It seemed like it initially, before Media Molecule themselves took the credit with a Twitter update that answered the question of "Is this artwork by you?" with "Why yes, yes it is."

So there's going to be some sort of ICO content in LittleBigPlanet soon, I think it would be safe to assume. Downloadable Sackboy Ico and Yorda would be nice, but some new content like the content Sony had for the Metal Gear Solid LBP packs would be even better. Inevitably, if any of the above does actually happen, someone will produce LittleBigIco, which I imagine won't be too difficult considering much of ICO revolves around platforming and weight-based puzzles, which LBP can easily do.

More intriguing is the timing of the reveal. Last week a video for Team ICO's next project, the mysterious TRICO, leaked online. Could this LBP partnership indicate that Sony will be making TRICO official soon? E3's coming up.

Name Game: Get It Together Leels 28 Comments