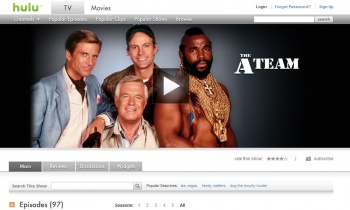 Could a Hulu-Xbox 360 partnership be announced during E3 next week? Signs on the internet are pointing to maaaybe.

With Netflix already keeping lazy Xbox 360 owners' rear ends squarely affixed to the double-cheek-shaped groove at the bottom of their sofa cushions, the idea of Hulu coming to the console seems downright dangerous.

You're telling me I can stream Desperate Housewives and all five seasons of The A-Team in addition to Kickin' It Old School without having to lift my arm? I'm never going outside again.

Don't get too excited yet, though. Hulu's only a possibility for the 360, though, judging from some tidbits floating around the internet, it could be a very likely one. Where's the proof? Well, G4 leading lady Olivia Munn recently updated her Twitter with this message: "Just finished promos for hulu/microsoft event I'm doing on june 8!"

A Hulu/Microsoft event, that's happening but a few days after E3, featuring one of gaming TV's most recognizable faces? Though the MS/Hulu partnership could have little or nothing to do with the 360, it's not that hard to put two and two together here.

Consider also, as Gizmodo points out, that Microsoft's Shane Kim said himself last December that he was trying to cut deals with video sites like Hulu. So Shane Kim wants it to happen. Lazy fools like me want it to happen. Why shouldn't it happen?