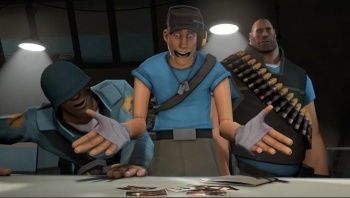 Sure, Valve's "Meet the Class" videos are great, but a full-fledged Team Fortress 2 movie? The fans want it, and Valve says the demand is so "hard to ignore" that they'd love to see it happen too.

With the runaway success of Team Fortress 2's "Meet the Class" videos, Valve has gained a level of success nobody expected the studio to achieve: not just game developers, they're respected filmmakers now, too.

A handful of clever and well-made shorts are one thing - the folks at Valve are obviously talented storytellers - but can they make a movie? Who knows, but there's clearly demand. "The number of people at this point who want us going off and making full length movies and that sort of stuff has got to a point where it's hard to ignore," TF2 designer Robin Walker said.

The fans want it and it sounds like Valve wants it too. "We're not ready to announce anything along those lines, but I don't think there's a person in this company that wouldn't love to see a full-length TF movie or even a 10-minute movie," Valve writer Erik Wolpaw said. "I'm not just being cagey. I'm a little bit removed from these kinds of things. But they keep giving us a little bit more rope with which to hang ourselves, so who knows."

But while we're all waiting for TF2: The Movie, there's still plenty to look forward to, TF2 fiction-wise. There are still Pyro and Medic videos to be made, which, if the increasingly intricate nature of these films indicates anything, may just be more ambitious than "Meet the Spy." On top of that, the "Meet the Class" team will be working on a TF2 comic, which should be along sometime in the future.