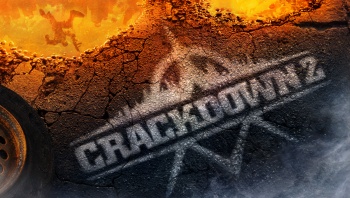 Ruffian Games is doubling up on the number of people who can tear up Pacific City co-operatively or competitively in Crackdown 2.

Co-op in the original Crackdown was one of the most chaotically fun multiplayer experiences to be had on the Xbox 360 at the time of the game's release, but times have changed since then, and games like Left 4 Dead have shown that when it comes to working together, the more is very much the merrier.

Crackdown 2 dev Ruffian Games, then, is designing its game with that mentality in mind. According to the info on the game's official Xbox.com page, Crackdown 2 will double up on the multiplayer mayhem by allowing up to four players to work co-operatively in the game's campaign mode. Four-man contests to see who can throw a dead body the furthest off the bridge into the ocean? Yes please.

That's not where the multiplayer side of Crackdown 2 ends, however. In addition to co-op, Ruffian is adding a new competitive multiplayer element to the series with some sort of versus mode that'll hold from two to 16 players at a time. No details on what exactly this mode will be, but I imagine it'll involve lots of people jumping around trying to shoot each other out of the air.

I for one cannot wait to be corpse juggled and called an ethnic slur by some 12-year-old kid over Xbox Live who got their hands on a homing rocket launcher.

Gallery of the Day: 8 Games That Ensure Couch Co-Op Lives On DrStrangelove 2 Comments