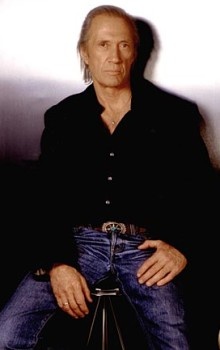 Actor David Carradine, best known for his roles in Kill Bill and the 1960s television series Kung Fu, has died.

The son of prolific American actor John Carradine, David's career began in the early 60s with various roles in film and television, including a turn in the title role of the short-lived 1966 western series Shane. But his breakthrough came in 1972 with the cult favorite television series Kung Fu, in which he portrayed Kwai Chang Caine, a Shaolin monk who lives a lonely, nomadic existence wandering through the 19th century Wild West.

His career from that point was long, varied and not particularly noteworthy, although he did earn a certain degree of lasting fame as Frankenstein in the 1975 classic Death Race 2000. He also tried his hand at videogame work in 2006, providing the voice of William Sharp in the Volition sandbox game Saints Row. But it was mostly syndicated television series and low-budget crapola that marked his work, cementing his reputation as a solid B-movie actor.

But in 2003 Carradine experienced a renaissance of sorts thanks to his Golden Globe-nominated performance in Quentin Tarantino's two-part opus Kill Bill, in which he wowed audiences with his portrayal of the intense, psychopathically murderous yet somehow sympathetic title character. In spite of his newly-resurgent fame, however, Carradine showed no sign of easing up on his schedule; according to the Internet Movie Database he had roles in 14 separate projects in 2009 alone.

Carradine was found dead at a hotel in Bangkok, Thailand, where he'd been working on his latest film, Stretch. Initial reports suggested he had died of natural causes but it now appears that the actor committed suicide by hanging. He was 72.