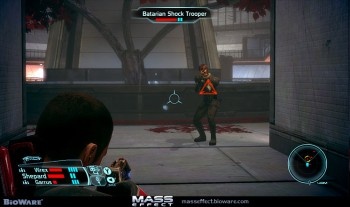 Through the sound and fury of E3 comes news that the second DLC for Mass Effect will be announced soon.

BioWare bosses Greg Zeschuk and Ray Muzyka told Joystiq that the second piece of downloadable content for Mass Effect would be "announced and detailed soon," and in fact Muzyka said he'd actually been playing it at the BioWare offices before coming to E3.

What the upcoming DLC will actually include is largely unknown, although it was described in a Future of Mass Effect video as a "casino/gaming/Fight Club space station" with much more focus on combat than story. There's also been no word on whether the Xbox 360 and PC versions of the update will release simultaneously; PC gamers had to wait four months longer than their console-owning brethren for the first DLC release, Bring Down the Sky, but then ended up getting it free, which struck me as a pretty fair deal.