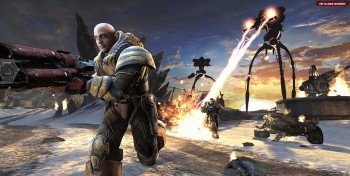 Mark Thomas, who raised eyebrows and suspicions when he bought a majority stake in Midway last year for $100,000, is walking away from the compay with a $5 million settlement.

Thomas bought the 87 percent stake in the company from Sumner Redstone in December 2008, assuming the company's $70 million in debt in the process. Paying money, even a relatively piddling amount like 100 grand, to buy up huge amounts of debt may sound counter-intuitive but in the dark, arcane realm of finance it actually resulted in a major tax refund windfall for Redstone and put Thomas in line for some serious cash too.

Thomas was granted "preferred debt" as part of the purchase, which moved him straight to the head of the line of creditors seeking repayment from the company. That part of the deal could have netted him as much as $30 million; naturally, Midway's other creditors were less than thrilled with that particular turn of events and eventually sued Redstone, his daughter Shari and Thomas himself over the deal, alleging fraudulent transfer, breach of fiduciary duty and other such naughtiness.

The creditors committee and Thomas have now come to an out-of-court settlement that will see the majority shareholder walk away from the company in exchange for a $5 million payout. The creditors committee said it believed it would have prevailed in court but the potentially high cost of legal fees in pursuing the matter meant the settlement "represents a prudent exercise of (the committee's) business judgment."

The $5 million dollar settlement is considerably less than the $30 million in secured debt Thomas had claimed (along with $40 million in unsecured debt, which he also leaves behind) but as the old saying goes, a bird in the hand is worth killing with two stones. And let's face it, turning $100,000 into $5 million in the span of seven months, by essentially doing nothing, is no mean feat either.