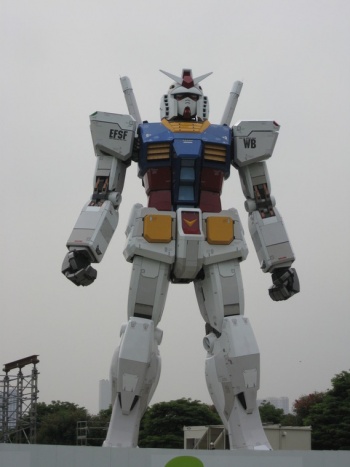 Work is wrapping up on the 1:1 scale statue of the eponymous giant robot in the groundbreaking Mobile Suit Gundam anime - standing 59 feet tall in the middle of Shiokaze Park in Odaiba, Japan.

Back in March, we reported that those crazy Japanese were planning on celebrating the 30th anniversary of the classic Mobile Suit Gundam mecha anime ... by building a life-size replica of the titular mech. The finished product - built from fiberglass-reinforced plastic over a steel frame - would tower 18 meters (59 feet) over Odaiba's Shiokaze Park, radiate light at 50 points on the body, shoot mist from other parts, and feature a movable head.

Well, it's finished. And it's awesome.

Though the original RX-78-2 Gundam design looks painfully retro these days, and wouldn't look nearly as cool as, say, a 1:1 replica of the Zeta, Freedom, or the Nu - shut up, Keane - it has an iconic status in Japanese pop culture like no other. Really, there wasn't ever a choice, here. Maybe a Char Custom Zaku, but then again, how can something be three times as fast when it's standing still?

Mobile Suit Gundam, by Yoshiyuki Tomino, told the story of an interplanetary war between the Earth Federation and the space-dwelling Duchy of Zeon, when young engineer Amuro Ray falls into the cockpit of the prototype Gundam and - upon actually reading the owner's manual - uses it to kick Zeon ass. The series would pioneer the "real robot" genre of mecha anime, featuring giant robots in (relatively) realistic military situations instead of fighting giant magical monsters. It would spawn a franchise largely consisting of angsty teenage pilots and mysterious mask-wearing rivals.

The 18-meter Gundam will stand for two months in Shiokaze Park before being disassembled. By disassembled, they of course mean taken to their secret underground laboratories where they'll finish the design and make it fully functional. We're still onto you, Japan.

Now if you'll pardon me, I need to go have a fanboy freak-out for a little while. Because holy crap, guys. Life-size Gundam!