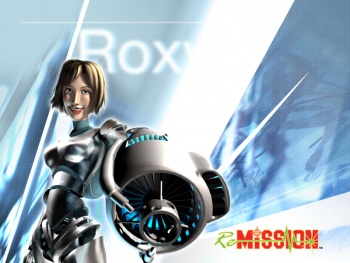 Virtual Heroes and HopeLab are collaborating on the next version of Re-Mission - a game designed to help children suffering from cancer on their treatment and recovery.

Games can do a lot of things, in case you haven't heard. They reportedly make kids violent. No, wait, they help with hand-eye coordination. No, they just make you sleepy.

I'll admit, when I read the press release that announced Virtual Heroes - a Research Triangle, NC-based company that specializes in serious games (no, not grim, gritty games like Gears of War or Metal Gear Solid, but games actually designed to help teach or instruct) - had teamed up with HopeLab, the developers of a game called Re-Mission... I was skeptical. After all, despite what the website said about ensuring biological accuracy, the game still has you playing as a sexy nanobot making her way through a human body to blast monstrous cancer cells with lasers. How was that in any way teaching a child suffering from cancer what was going on and how their treatment would help them?

Then I read a bit more, and I think I get it now. Rather than just teaching kids exactly what is going on inside their body, Re-Mission aims to make them feel like they have power over their disease - to quote the site, "A video game designed especially for kids with cancer might give them a feeling of power over their disease as they blast away at the cancer cells." Makes sense, doesn't it?

More importantly, though, the game is designed to make the kids feel like their treatment is working - and gives them a reason to adhere to it. And thus far, it looks like it's... actually effective:

Results showed that a specially designed video game can have positive impact on health behaviors in young people with chronic illness. Specifically, playing Re-Mission improved treatment adherence and produced increases in self-efficacy, and cancer-related knowledge for adolescents and young adults with cancer.

Huh. I was skeptical, but the more I read, the more I think that sexy nanobots blasting cancer monsters ... isn't as off-the-target as I had first assumed. So there you go.

The next iteration of Re-Mission will be part of a collaboration between HopeLab and Virtual Heroes. Presumably, like the current version, it will be distributed free of charge to young cancer patients.

Who said videogames never do anything good for kids?