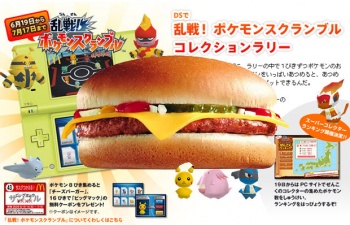 Nintendo and McDonald's are partnering for a promotion that allows Pokemon players in Japan to receive free burgers for collecting digital Pokemon stamps on their DS.

True story: Last week I went to Burger King solely for the purpose of buying a Kid's Meal so I could get my hands on the Pokemon cards they were packaging with the food. I thought that was pretty neat, but this Nintendo-McDonalds partnership is looking to take Pokemon-fast food cross-promotions to a whole new level. By collecting digital Pokemon stamps at McDonald's, DS owners will be able to trade their "Pokemon" for free burgers.

Though I'm not entirely sure how it works in detail, the promotion seems rather like the "sandwich cards" you get at delis like Subway, where if you buy a certain number of subs and get your card punched for each one, you get a free sandwich. Except, obviously, instead of punched holes, here you're collecting Pokemon.

Seems that some McDonald's branches in Japan are going to feature WiFi hotspots dubbed "Nintendo Zones," and you just need to bring in your DS and download a Pokemon stamp, and you're all good. Collect eight of them to earn yourself a cheeseburger, or save up sixteen and you'll have enough for a Big Mac.

Besides "only in Japan" and "great, now I'm hungry," the main thought this news brings to mind is how this promotion is the complete opposite of what I thought Nintendo was going for with the PokeWalker, the pedometer revealed last week that lets you train your Pokemon while you walk. That, on some level, must have been to promote physical fitness, as Nintendo would nowadays. This, though, can only promote the consumption of unhealthy foods. Oh well. If you're really burgin' I guess you can always power walk to McDonald's.